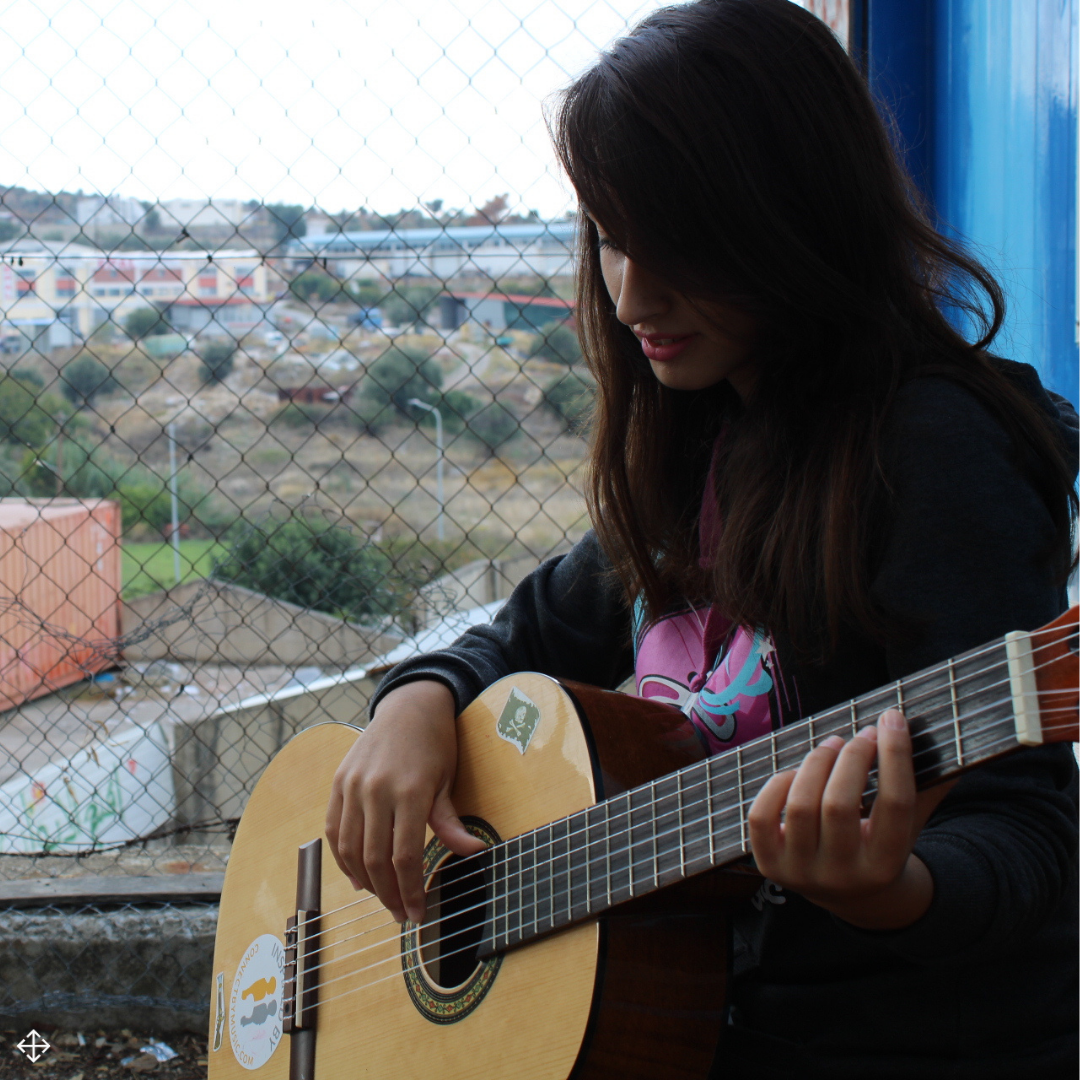 The morning we met Manar, she was on her way to music class. Holding a guitar. Ready to find her way around its strings. Exploring it. Playing random notes. Whispering an emotion. Looking for something.

An hour passed. We were waiting outside the music classroom with a group of community volunteers. Gathering around Kara Tepe’s community center. Looking at the solar panels that were installed there three years earlier, we couldn’t help but share our thoughts about that rare opportunity that helped to shift the whole community to a cleaner, more reliable and sustainable environment for the residents. Feeling some sort of humble pride. That pride that makes you strive to give more to the community, to the world, to the people.

Every time we gather, we experience many silent moments that take the lead of our conversations. Those too, are moments that we share. We could hear a melody reaching out to us. A piano, accompanied by a flute and a guitar. It must have been Manar’s.

"The ways to success are never easy. But we can’t stop here," said a woman who was standing outside, with us. Her name is Ibtihal. She then called her husband: "Ihab, join us here. Manar is about to finish her music class and we need to get ready for the next distribution".

Ibtihal and Ihab are Manar’s parents. They both volunteer with our partner organisation, Because We Carry. Ihab is one of the community’s well-known hairdressers, with over 25 years of expertise in the field. He even had his own hair salon back in the days, in Baghdad, before the family was forced from their home. "Sometimes you win, sometimes you lose but you can’t stop dreaming", said Ihab.

As Kara Tepe’s children were on their way to another SPACES session, Manar left her class and handed the guitar to her younger brother, Laith, 15 years old. It was Laith’s guitar in fact. Laith had earned it after having followed the community music course for over nine months. A course empowered by "Connect By Music". Laith is a dedicated community volunteer with Movement On The Ground. He believes that humans must be their own source of strength but always grateful to those who empower them.

Manar ran into her room to change and get ready for the sports session. At 18 years old, she isn’t only an aspiring musician, she's also a volunteer sports coach for our Movement On The Ground sports program, sponsored by the Barça Foundation. She coordinates the Futbol Net sessions and educates the children of Kara Tepe about the importance of physical exercise and treating each other with respect.

In our eyes, Manar is a triple threat, passionate about music, sports and science! But above all, she is a loud and proud feminist who works hard to empower the young girls and women of Kara Tepe. During the two years she's spent in Kara Tepe, she has witnessed the growth of her community – men, women and children. A woman’s social growth for her, is no longer a myth as it used to be back home. More than ever, she is determined to become what she has always dreamt to be; a scientist and a musician. Determined to prove to the world that a woman can make it all happen.

She believes that ''Everyone must transform challenges into opportunities to thrive in the future''. She is going to pursue her music lessons and when the time is right, study science, work in a lab and find cures to heal the world!

You can choose where your donation goes